As Mother Teresa was born here it is no surprise to find a memorial to her plus lots of quotes of hers all around town. Some of her quotes are quite interesting others are not to my taste at all eg. Those that are anti abortion – so I had mixed views. Anyway interesting to learn about her life. 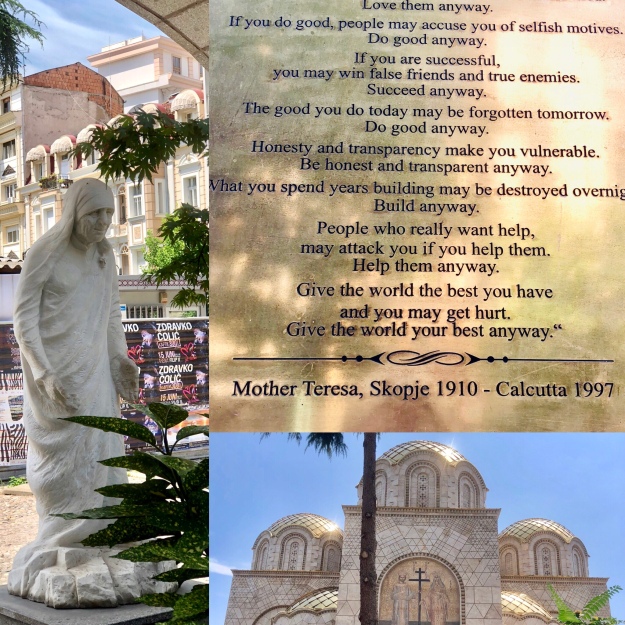 On the other hand I really had my expectations exceeded when I visited the Holocaust Memorial Center for the Jews of Macedonia museum. The first half was of particular interest to me as it was all about the Sephardic Jews who migrated to this region at the time of the Spanish Inquisition – while I have Sephardic cousins who have connections to Salonika I hadn’t appreciated that all the Jews who resettled here came from Spain also – so found it very interesting. The holocaust section was also well done. There were about 7000 Jews living in Macedonia during WW2 and during a very short period of time they were nearly all deported to Treblinka and killed. Only those who had other nationalities were able to leave before deportation but of those who were deported – about 90% of the population not a single person came back. It is very well done because it shows people talking about the experiences at the camps – some survived in places like Auschwitz – and I ended up staying there for two hours. Even better was that I had the museum almost completely to myself – a typical situation in this part of the world. Well worth a visit if you find yourself in Skopje. 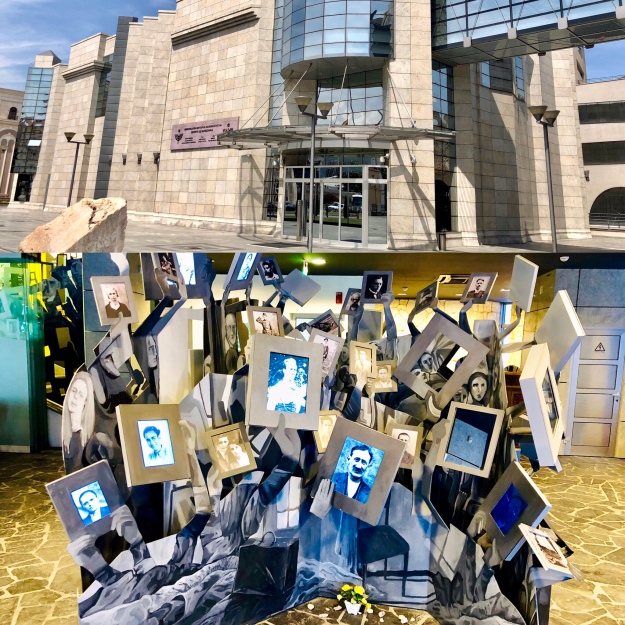 The Memorial Centre for the Jews of Macedonia. Sculpture represents photos of those who never came back.

When you cross over the Stone Bridge you are instantly transported from the modern satues and everything oversized to the old town of Skopje. At the highest point the Tvrdina Kale Fortress was used to ensure that there was good visibility in all directions and obviously as defence against those pesky Ottomans. The space age building is the sports stadium. Being up high also gives a good feeling visual of the mountains that surround this city.

The Carsija (Old Turkish Bazaar) is also on this side of the River Varda and this is clearly an area dominated by the local muslims and has plenty of mosques plus colourful alleys to get lost in as you wander around the stalls and shops – a mix of food, fake handbags and lots of silver and gold.

The Carsija or Old Turkish Bazaar

I decided it would be nice to have a wander around the streets of Skopje at night – easy to do as I was right next to the central square. They make a nice job of the lighting and there is tons going on at every corner to keep you amused -think Covent Garden, London. 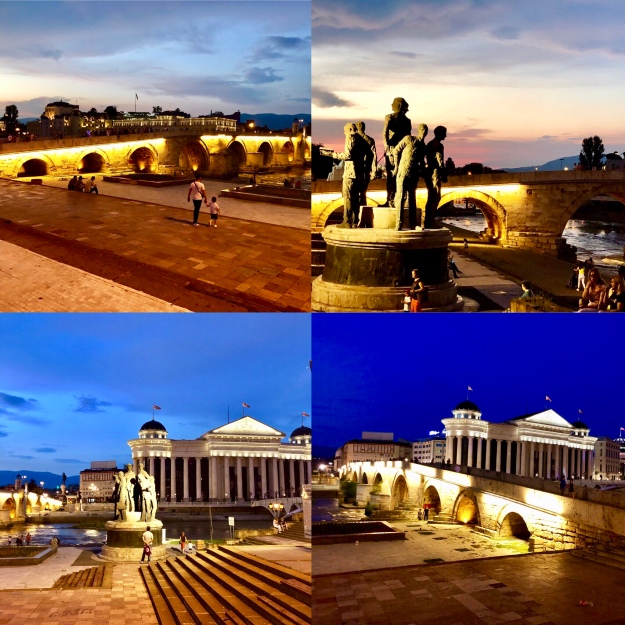 In my wandering I also found the new theatre which aside from being a splendidly large building with lots of statues on the top of it also had even larger statues depicting the different art forms – I kind of like these:)

Depiction of the Arts outside Skopje Theatre

I also really enjoyed the Museum of Macedonian Struggle for Statehood. For about 5 dollars I received a one hour private tour and learned a lot about Macedonian history and the struggle for independence over the past 200 years up to and including the Balkan war. In particular the Balkan wars were very tough on everyone involved and of course depending who you speak to everyone has a different story but for sure a lot of people were killed and often quite gruesomely. I definitely want to find out more as I was particularly shocked to find that British bombers were the first to use napalm at Mount Gromos during the Greek civil war in 1948 – not something they ever taught us in history class! Unfortunately no pictures allowed inside the exhibits – which are all very lifelike waxworks (but don’t let that put you off!)

The sun (which is also part of the North Macedonian flag) in stained glass plus again in the floor with the exhibit that houses their constitution.

A short drive out of town took me to the delightful 12th Century Byzantine church of Saint Pantelejmon – unfortunately no pictures allowed inside which is a shame as it has an interesting history. The original frescos were painted over in the 1800s and then revealed again in 1923 when it was realised they were over much older paintings. The original frescos inside, like the ones I saw in Boyana in Bulgaria from the same period, were the first ones to use humanistic expressions for the saints’ faces rather than the usual bland image approach. It is theorised therefore that Giotto may have got his inspiration for his subsequent work in seeing these frescos which were painted much earlier than originally thought. Who knows??? 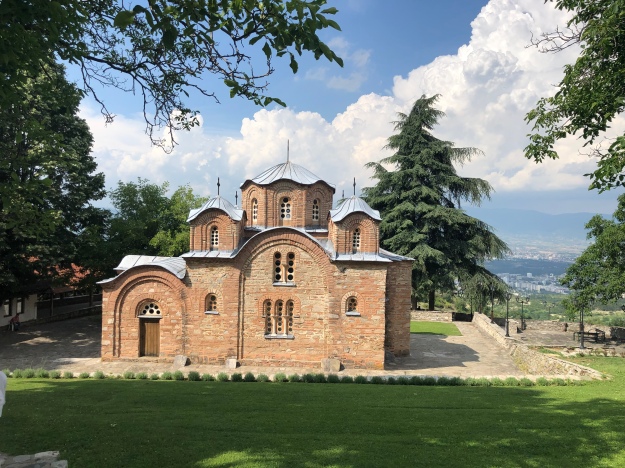 We then headed to a favourite local spot for R and R, Matka Canyon where we took a scenic boat ride and visited Cave Vrelo. We were also meant to take the cable car up to the giant (of course!) Millenium Cross but an incoming thunderstorm put a stop to that plan! A nice day out. 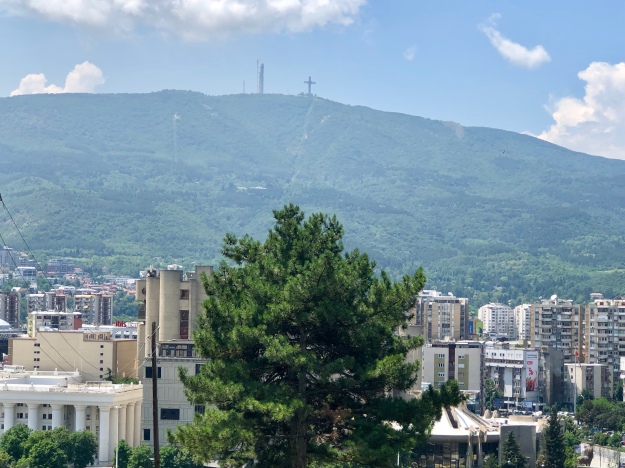 The Millenial Cross in the distance at the top of the mountain. Next door they are building a tower with a revolving restaurant!