I’ve mentioned before that I am not a wild fan of beach destinations and now I have remembered why – when it pours with rain as it did in my three days here – bar a couple of hours there is very little else to do except watch TV box sets – am loving Succession and read and plan more travels in 2020 – so that’s what I did. However, given I was in Mauritius I knew I would never be closer again (2.5 hour flight) so decided it made sense to stop by and add it to my places visited list

A quick visit to Victoria, the smallest capital in the world – was indeed quick – it was very wet and very small. A market and a Hindu temple and ten minutes to walk around. Too wet to visit the botanical gardens

For the two hours that the sun came out I grabbed a taxi driver and asked him to drive me around the island – pretty I guess. I understand that the rules of Dubai, Abu Dhabi and other UAE locations have brought up a lot of land and are building holiday homes and hotels there. It made me laugh that although they own their massive holiday homes they all choose to stay at the Four Seasons when they visit!

Beaches of Beau Vallon where I was staying

In a way I quite enjoyed the drama of the stormy weather – and at least it remains at least 26 degrees here however wet it is:)

Storms are gathering and the light in the building is looking back at my abode.

Off to colder climes for a bit on my next stop ………

Back to Morocco again brought back memories of my two week trip there three years ago with Tania but we never came to this part so new to me. Not as interesting as other parts but still good to be back.

Tangier has a walled casbah familiar from other parts of the country but always fun to wander around.

Once you get into the markets you can be assured of a riot of colourful stalls and street scenes. 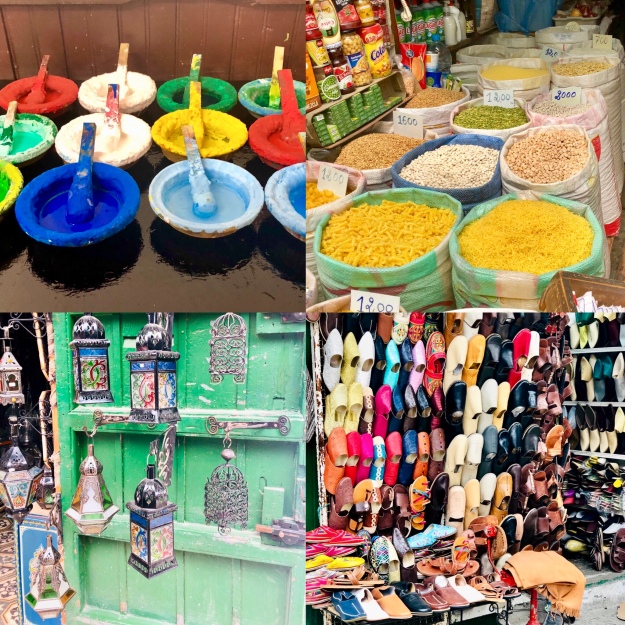 Lunch in Tetouan was lamb and apricot Tajine – forgotten how delicious they are.

We visited synagogues in Tangier and Tetouan – all Sephardic given that many moved to Morocco from Spain during the inquisition and to this day a lot of Spanish is heard in Tangier. The street below was in the Jewish quarter and deliberately had six pointed arches to reflect the Star of David 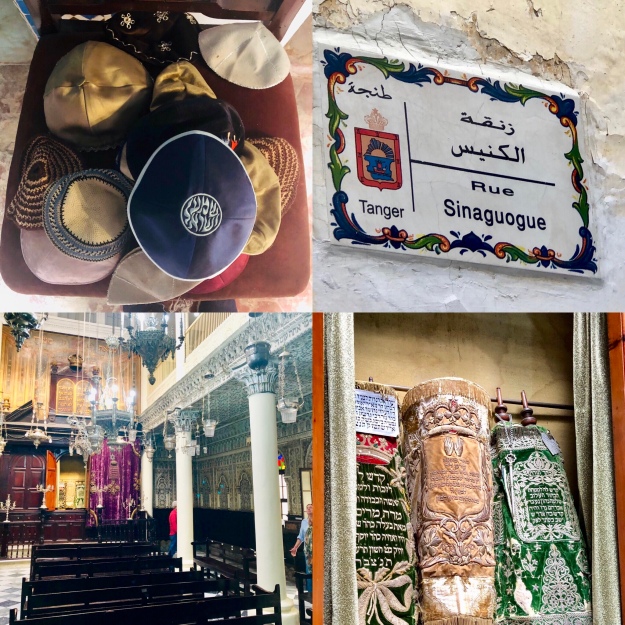 And lastly a stop at a closed (it was Labour Day) school for students who learn the traditional arts such as leather engraving, intricate plaster carving, woodwork and copper work. 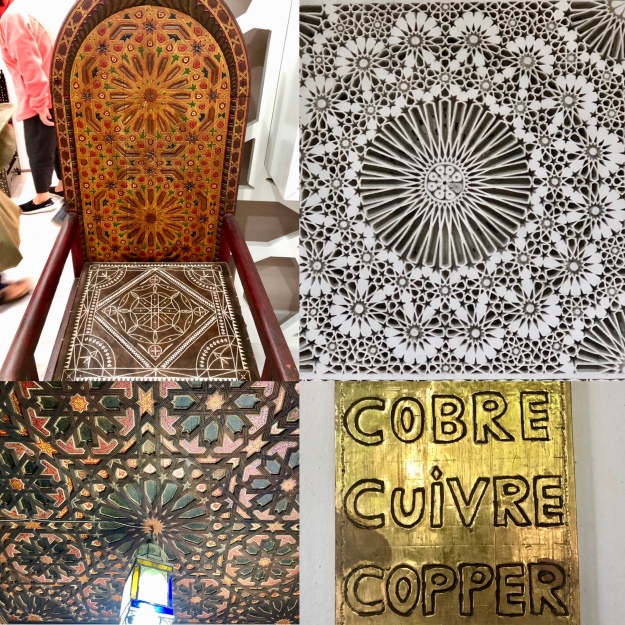 I spent a few days in and around Manaus – which is actually on the Rio Negro which is a very wide offshoot of the Amazon. Something about the ph level of this river makes it highly acid and all I understand about that is they don’t seem to have any mosquitos – and that’s a great thing.

Manaus is a bit of a tired city but with a few old (and to be honest a bit crumbly) buildings. These are the best ones. 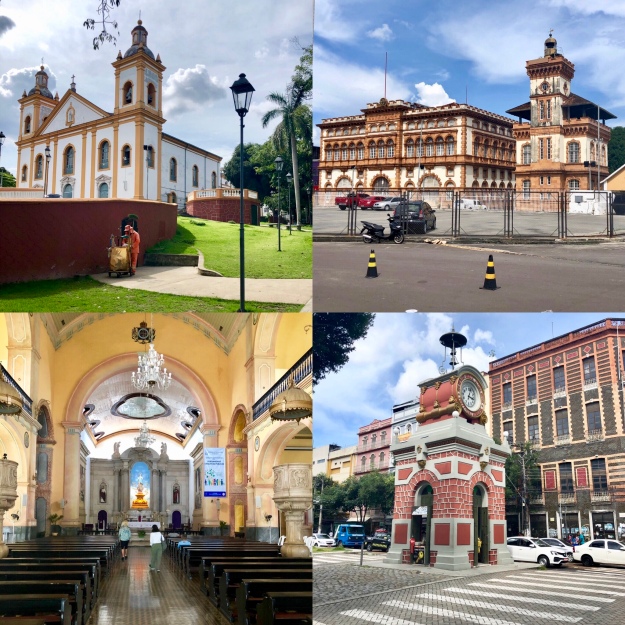 In it’s heyday it was a super luxurious place as the rubber barons made a lot of money thanks to lots of rubber trees and slave labour and Mr Goodyear who figured out how to process it. That was all great for the city’s fortunes (if not the slaves) until the Brits came and took the seedlings away so they could propagate them in Malaysia and Indonesia and that was the beginning of the end for Manaus.

It has a main town square (with wave style flooring very reminiscent of Lisbon squares) as well as the fish and handicraft market.

The market also sells a lot of “natural viagra” potions and pills and certainly I saw a lot of people carrying back small packets after visiting there (!) but they all swore they were fresh Brazil nuts!

This part of Brazil is known for its pink dolphins. We headed out 90 minutes down the Rio Negro – first to visit a very small indigenous village – 27 people now but was once part of a rubber plantation – hence the example of tapping the rubber tree below. Also they make hammocks – everyone in Brazil has at least two hammocks and they travel with them everywhere – have hammock will travel!

And then we went to see the so-called friendly pink dolphins. Very pretty but not so friendly in the end – one swung round at me (I think he thought I wanted his fish?!?) and whacked me on the forehead above my right eye. You can see me holding my head just after it happened. I think I will stay on land in future:)

A much safer way to see the dolphins – the pretend ones! 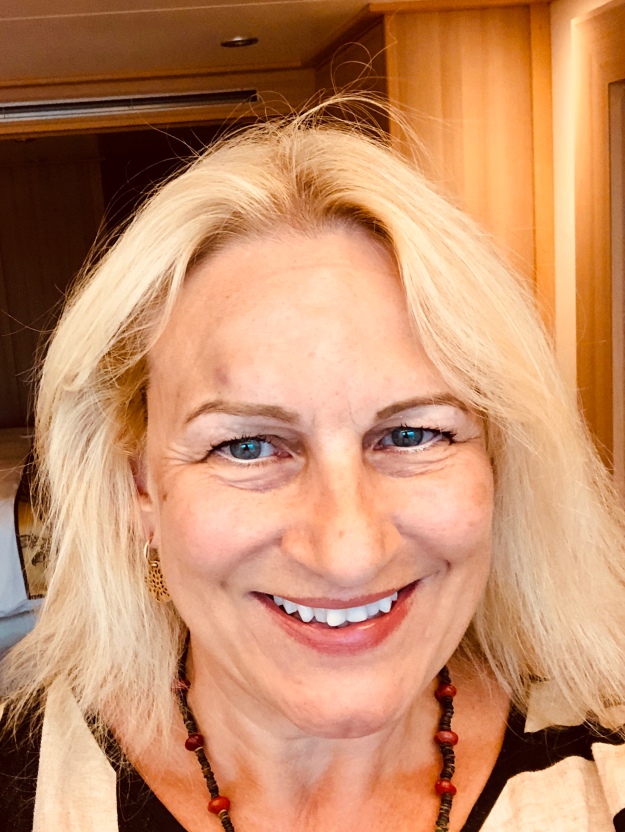 Day 2-bruises on eyelid too. 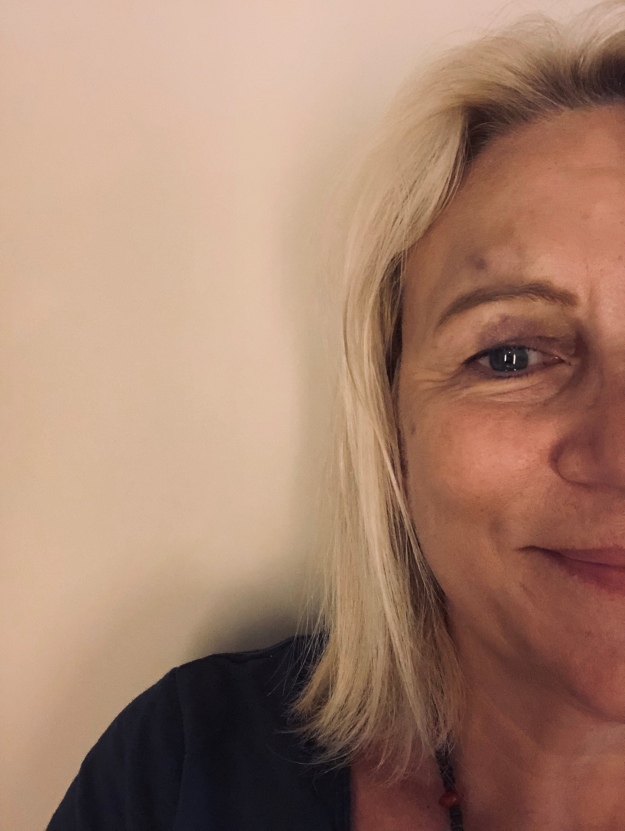 Now at purple colour stage and bored of this look!

We took a side trip to Malaga over the past few days. It actually had a nice feel to it and I think it is a town that is evolving into one with a personality and good vibe. We started to see the beginnings of a street art scene, ate at some good restaurants (including the famous El Pimpi where we indulged in the top of the range Iberian ham from chestnut eating pigs! ), we took a ride of the observation wheel, we walked the paseo along the oceanside, saw the impressive fruit and veg market and also visited the more traditional cathedral and the Alczabar. Great place for a short break. 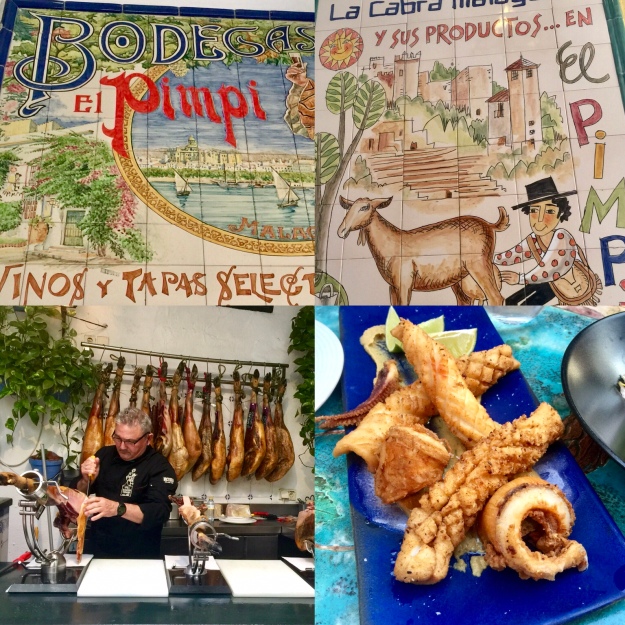