Having visited four of the Canary Islands earlier this year on my cruise – and enjoying them much more than I expected – I wasn’t planning to go back to soon; but my old friends Michael and Florence (one of my first former bosses and someone who was a role model as a senior woman in business early in my career) have an apartment in Tenerife where they head for a few months a year to escape the UK Winter – and who can blame them. They kindly invited me over for week.

Arriving in Tenerife by air – rather than via ship – gives a bird’s eye view of Mount Teide which dominates the island and was the place I spent my day on my last visit. There was a tiny smattering of snow on the top but that was all gone within 24 hours!

Mount Teide from the plane

I had to blink twice to make sure I hadn’t stumbled into Sydney Harbour by mistake when we visited the exterior of this extraordinary but nevertheless familiar looking building. It is the Audtorio de Tenerife in Santa Cruz and the local symphony orchestra is housed here. It’s very popular with locals and tourists alike and even Bill Clinton has visited. No Surpise that Santa Cruz is often referred to as “the Sydney of the Atlantic”.

In the village of Candelaria is a well known Basilica – created long ago when a wood carved Madonna and child was washed up on the shore in the 1300s. The local Guanches and then the catholics took ownership of it. No-one could trace where it came from but it was seen as a sign so the Catholics subsequently built a basilica. In the 1800s a tsunami hit the basilica which is right by the sea and the carving was washed away and never seen since. Spooky or what?

Next to the church are 9 magnificent statues of the Guanches (the indigenous race on the islands before the Spanish came in) which represent the kings from that dynasty. They look really good in that setting and each one has different things in their hands to denote their area of expertise. 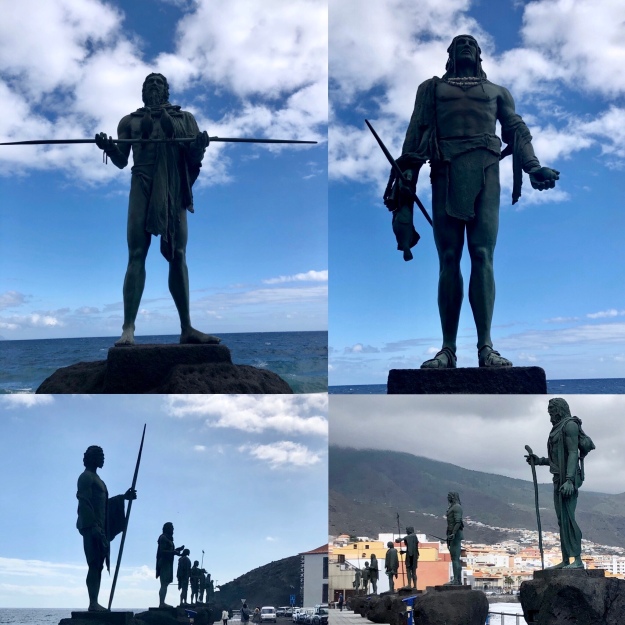 It’s not Spain if you don’t head off to a flamenco show. I’ve seen a few but this was very good because it was non traditional – very cool costumes and choreography. After the first three photos I got told not to take any more. Oh well.

A bit of flamenco

Michael and Florence organised for us to take the ferry from Los Christianos to La Gomera (one of the lesser known of the 7 (now 8 they have a new one now) Canary Islands so I was pleased to visit one I hadn’t seen before.

La Gomera is very pretty and far less developed than many of the other islands – a great place for hiking (and no of course I was not hiking!) but others do apparently. Christopher Columbus also landed here enroute to his discoveries – a man I admire for his tenacity in exploring uncharted parts of the world (and in far less comfort than I do!)

Around and about the island of La Gomera

Street scenes from San Sebastián the capital of La Gomera

We also stayed in a parador – the historical hotels owned by the Spanish Government which are always really well designed and in exceptional spots.

Views and grounds of the parador in La Gomera

The white building perched top left is the parador

We ended our trip with another good meal at the parador – preceded by a drink at the bar! 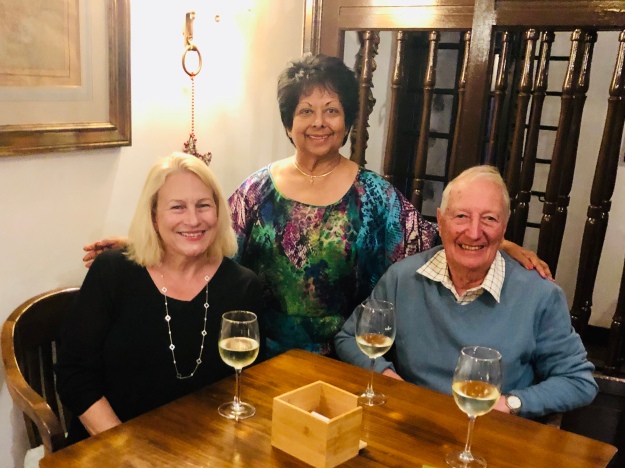 Florence, Michael and me!

Back in Tenerife we stopped by Los Gigantes – the name of the town and the enormous cliffs at its edge that just fall into the ocean. Majestic.

Los Gigantes – the town and the cliffs

And so after a week of sunshine and warmth – just four hours flight from cold and rainy London it was time to leave again. And here are my last views as I flew off (I do so love flying and seeing the world from above)

Up above the sky so high….