After visiting the less known parts of the Balkans it was a bit of a shock to arrive in Ljubliana, Slovenia where there are far more tourists and shops etc than I have been used to.

I decided I had to visit the famous Lake Bled, Lake Bohinj and the Vintgar Gorge – they didn’t disappoint for sheer gorgeousness and a perfect looking little castle (although we didn’t have time to go and see it) but now we are in July there are a few too many other tourists for my liking (and yes I know I am one of them!)

On Lake Bled we took a wooden boat (no morotorised boats or jet skis allowed on the lakes) called Barbara over to Bled Island which consists of 99 stairs to the church at the top. If you get married at that church the groom is supposed to carry his bride up the 99 steps and she is supposed to say nothing! No comment! I was huffed climbing them without carrying another human being!

At Lake Bled it is also obligatory to try their cream cake – the Kremna Rezina – so I did. It is quite similar to the one I had in Samobor a couple of days ago but this has layers of cream and custard cream and I had a raspberry version. It was a light as a feather and it did sway on the plate without collapsing – a sign it was the real thing!

A raspberry version of the famous Bled Cream cake

We then headed on for about 45 minutes to Lake Bohinj – this is less of a foreign tourist place and more used by locals as a recreational spot – again very pretty. 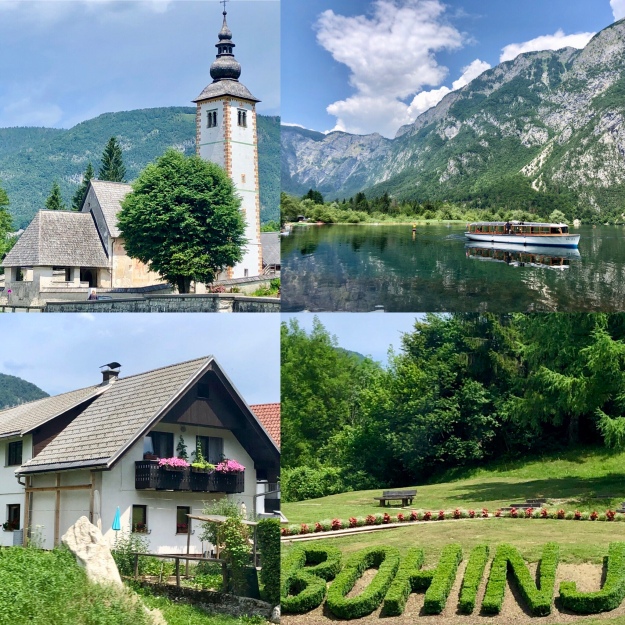 Around and about Lake Bohinj

Finally we visited Triglav National Park and walked along the Vintgar Gorge – about 1.6km each way. On the way back we enjoyed a violent thunder storm but it didn’t get too cold so that was ok!

I think I liked this place best of all but think I may return to the lakes and stay there next year during the Autumn when the colours look spectacular and there will be far less people around.