The story of the bombing of Dresden by the British and US allies is quite interesting and many myths about why it happened seem to abound. Until 1945 Dresden had not been bombed at all – it was a centre for precision work that had nothing to do with war machinery and also had a very large migrant population – mostly refugees from Berlin which was being severely bombed by that allies at that time.

But long before all that in the 17th century there was The “Elector” August II (August the Strong) who was a key player in establishing old Dresden as a cultural and arts Centre. He was quite the guy. 30 official mistresses and 300 unofficial; 3 official children and about 300 unofficial. He was the second son but although he was having fun with all these ladies he also wanted power. So the first thing he did was get rid of his brother – he did this my encouraging one of his mistresses to sleep with him -knowing she had syphilis! Both the brother and she were dead within two years. He then put himself up to be elected King of Poland (the people there elected their kings and although he was successful he had to convert to Catholicism – a big deal in a strongly Lutheran part of Germany. So when in Poland he was more catholic and when in Dresden more Protestant. It explains why the Frauenkirche was so ornate for a Protestant church and why his body is buried in Poland but his heart is buried in Dresden.

August the Strong and on the horse the hoof is seen crushing a rose as a reference to his amorous lifestyle!

Here is what Dresden looks like today as you drive into it (about 2.5 hour drive from central Berlin) 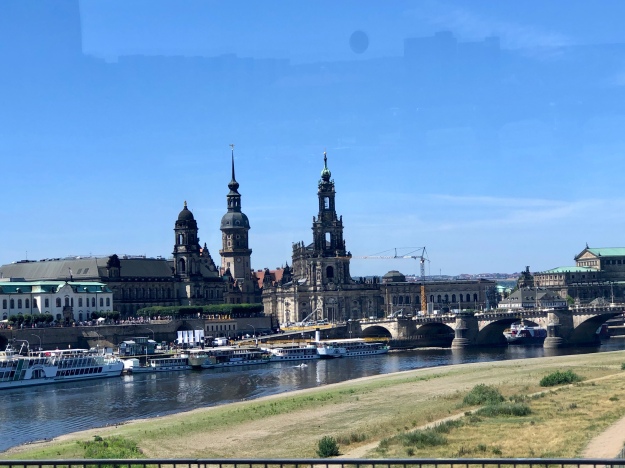 Looking across the River Elbe at the old town in Dresden

Back to the bombings. One theory is that Churchill wanted “revenge” on the bombing of Coventry which had decimated that city but equally there are theories that the British used Coventry as a scapegoat to be bombed by the Germans as they had cracked their code and didn’t want the Germans to know about it so the “sacrificed” Coventry rather than London. Some say that the Brits and US never trusted Stalin even after the Yalta conference so they bombed Dresden as a “warning” to him to show what they could do if he didn’t abide by the agreements made re the Berlin borders; and yet another suggests that Stalin encouraged the bombing of Dresden as he always had his eye on Berlin post war and Dresden was placed between the Eastern bloc and Berlin.

There is even debate about how many were killed. When it happened they thought about 20,000 civilians had been killed; Goebbels decided to use the occasion for propoganda at the time given the Germans were starting to be very tired of the war and so said it was 200,000 in order to urge them on to fight against this atrocity. The belief nowadays was it was around 50,000 due to the large number of refugees there from Berlin and the use of both fire bombs and sticky bombs which flattened and burned over 90% of the city.

Not much was done to the city by the occupying Russian communists after the War so all the reconstruction really dates back only from the early 90’s.

The first picture shows the post bombing of the cathedral and then how it looks now.

Frauenkirche after the bombing 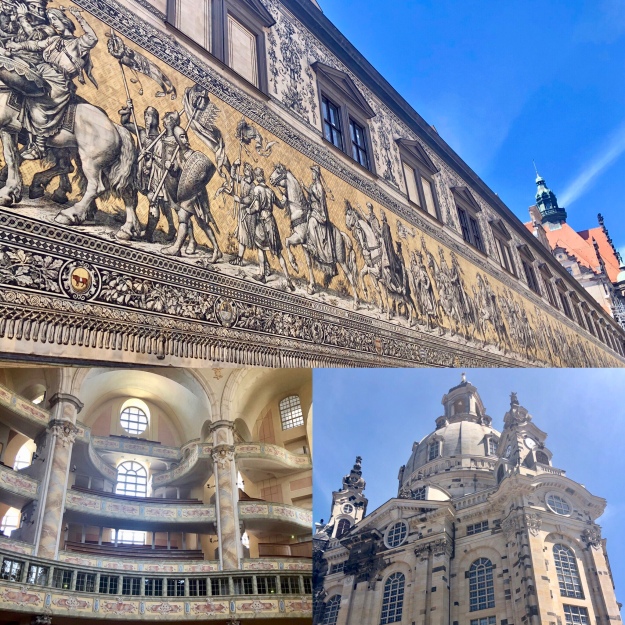 Frauenkirche at the bottom and The Procession of Princes

The Procession of Princes at the top is close to the cathedral and made out of 20,000 porcelain Meissen tiles! It shows the image of every elector and is quite spectacular.

Then on to Zwinger Palace the home of the electors and also where a lot of the art is kept. Incredible to see how it is now compared to the pics below post the bombing and for a long time afterwards. 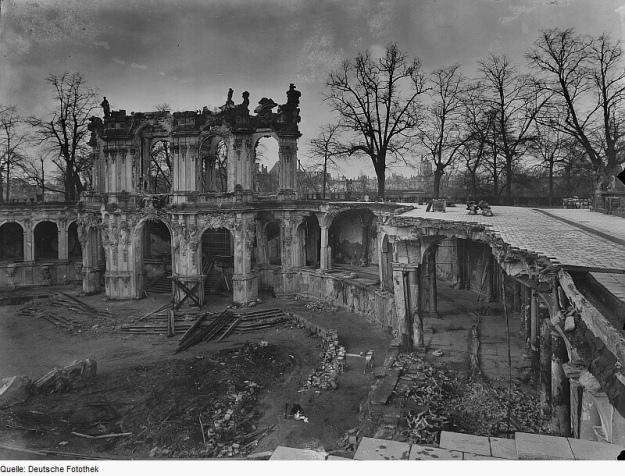 The old town including an iron made bridge linking the palace to the church – for special people only!

Unfortunately the Old Masters’s Gallery in the Zwinger was closed for a couple more weeks for renovations so I went to the New Green Vault where a lot of incredible treasures are kept – jaw dropping.

Gold, ivory and the Green Diamond at the New Green Vault

So much more to see and do in Dresden so I do hope to return. Definitely worth visiting.