Great meal at Rolf and daughters in Germantown. Taken there by Barbara who I met last month at an Oracle conference for the first time. When I found out she came from Nashville I got all sorts of great tips from her and she organized dinner and then a visit to a show at the Grand Ole Opry. This time you can see what it looks like full and here are a couple of clips to show the diversity of music being played. I had a ball.Enjoy these snippets.

Then I headed off to a honky took bar to listen to some more music and watch the world go by accompanied by a large gin and tonic and lots of friendly folk.

And I did promise you the Parthenon – and here it is – a full scale replica of the real thing because, as everyone I’m sure knows, “Nashville is the Athens of the South”. Something to do with it being a well known centre for education.

﻿Here’s a comparison with the real thing – can you spot the difference?﻿ 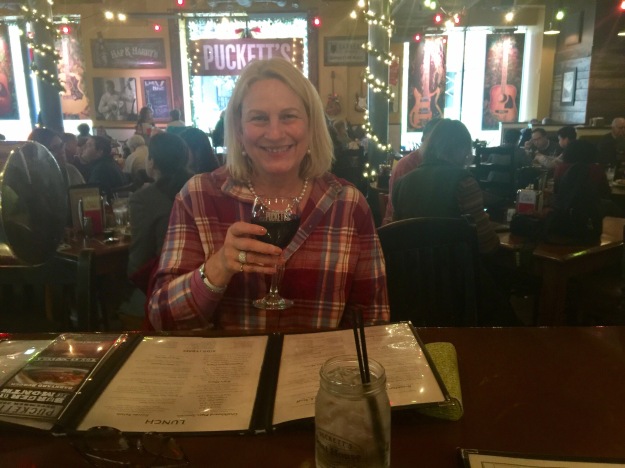 Big day in Nashville -up early and first stop is the Ryman Theatre for a self guided and backstage tour. This theatre started 90 years ago. The man about town at the time Captain Ryman was wealthy and the town had a reputaton for knowing how to have a good time (if you know what I mean?) – often led by him. As was common at that time where there was fun and booze there was also likely to be a strong contingent of religion trying to counter that and save souls (if you’ve seen Guys and Dolls – you will get the picture). So the preacher of the town was becoming quite influential and Captain Ryman decided to visit his tabernacle and tell him exactly what he thought of that in no uncertain words – but instead by the time he came out of the visit he had been converted and so funded the building of this amazing building which subsequently became the home of the Grand Ole Opry – a live performance three times a week that is also live broadcast on radio – but more of that later. 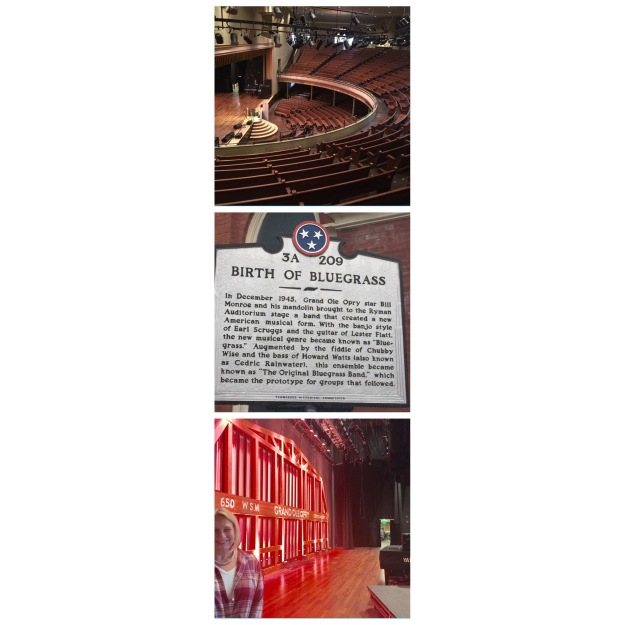 So, as I keep finding in the South there are constant examples of strong women. In 1905 a single mother Lula Naff was a secretary at the Ryman – four years later the owners could not turn a profit so it was going to be closed down. She decided to lease the buildings and turns a profit in the first year. 4 years later the Board made her the CEO and she turned a profit every single year, and each year was better than the last. She attracted artists from Broadway shows and individuals to perform who were as wide ranging as Yehudi Menuhin to Katherine Hepburn. She was in the role for 55 years – incredible. It nearly closed down again in the 80’s but once again a lady stepped in – this time Emmylou Harris who helped raise the funds to fully restore it. Now it has had everyone from Ed Sheehan to Coldplay to Taylor Swift and it still hosts the radio show. Well worth visiting.

While I was in Country and Western mode I dived into the Johnny Cash (the man in black) museum and now can’t stop humming Ghost Riders in the Sky (that’s the one with the chorus “yipeee i o, yippee i a, ghost riders in the sky”.

En route I passed a squillion boot and stetson shops.

The Man in Black and me in a stetson – who is coolest???

And don’t worry – I didn’t actually buy the stetson – just trying on like my friend Emma (of Russian hat fame and who also incidentally is a big fan of the tv show Nashville) would do!

More to come – I visit the Parthenon (via the City trolley bus!), the Country and Western Hall of Fame, a live performance of the Grand Ole Opry – live sounds to be shared.

I’ve always thought of myself as a rock chick (well in my mind anyway) and that C & W was not my musical genre but have to say that listening from everything from hill billy, blue grass, traditional and now modern – it is all very addictive and I can now understand why there are so many million fans – I may even download some tunes.

Ps. Just spoke to the hotel concierge who said he had always wanted to go to Australia but heard there were giant spiders everywhere so was too scared to go?!

Finally got to see Graceland. As it was so cold and out of normal season it was actually very quiet which was great. Apparently it’s the 2nd most visited historical house in the US after the White House so it is probably normally heaving with people – lucky for me. My biggest surprise is it is smaller than I expected it to be and it really feels like a home. They don’t show you any of the upstairs as apparently sometimes Lisa Marie still stays there and also Elvis only ever entertained downstairs. I thought I would do a montage of photos. The place has been preserved as it was when he died in 1977 so it has the ultimate in latest gadgets from that era. Personally I would like the pink Cadillac which he gave to him Mom or even the pink buggy – Elvis was an early metrosexual who quite happily owned pink things and even wore pink too. Interestingly compared to most members of the rock and roll community he actually comes across as a good and generous son, husband, father and friend. Some of the visitors were fully dressed in 1950’s regalia and looked amazing – I get the impression they visited quite often.

Today I visited the Civil Rights Museum dedicated to Martin Luther King who was assassinated here in Memphis. This trip seems to be following people who changed the world (JFK, Elvis and MLK) and who died too young. I don’t think this theme was intentional when I planned it – but it seems that being a change agent can come at a cost. The Civil Rights movement is a tremendous story of dedication and resilience over many decades (actually centuries) of mostly ordinary people who believed that “if all people were created equal” then that meant all people. It was good to see how many women – black and white – played a significant role in the passive resistance marches and all the other activities that finally removed things like segregation on transport and in schools. The whole thing was very moving and once again I was standing looking back at the motel where MLK was shot from and once again there was a fair exhibit covering all the conspiracy theories only to conclude that like with JFK, it was a long gunman with unclear motives.

Finished the day with some more ribs – for some reason no rib restaurant sells coffee? What’s with that? Does anyone know?

As promised tonight it is all about the famous ducks at the Peabody hotel. Great fun watching them marching into the fountain and if I have figured this out correctly here is a video (easier to see on ipad) of them doing just that. https://youtu.be/DeWTi9O7AuM and in case it didn’t here are a couple of photos.

Tomorrow it’s all about Elvis – (I think he may still be in the building)….and as a teaser you can see  I was decked out in my very own blue suede shoes for my long awaited visit to Gracealand

I arrived at the majestic Peabody Hotel in Memphis last night. It is a massive beautiful old building in the centre of town. It has hosted the good and the great and now me and has a whacking great Xmas tree (32 feet) in its beautiful lobby but it is particularly famous for its ducks. Every day at 11am 5 ducks leave their palace on the roof, travel down to the lobby by lift and walk along a red carpet to the central fountain where they splash about all day until at 5pm they make the reverse journey to their palatial home. Apparently about 200,000 people come to see this every year and they have been doing this for well over 75 years and I can confirm there will be pictures of the ducks before I leave. Also they have a commitment to never serve duck at any of the hotel restaurants – even the French one – although they were a bit vague about what happens to them after each group gets “changed over” every 12 weeks? I am trying not to think too much about that.

Last night the big thrill was to head straight out to the street which symbolizes the soul and blues that this area is famous for – Beale Street. There is one live bar after another and basically you just walk by and choose one playing music you like. I found one called Rum Boogie Cafe which was like being catapulted into the movie the Commitments – Mustang Sally, Soul Man etc – had a great time – even on my own – singing along to some great sounds while devouring some rather good spicy chicken wings.

Today I visited Sun Studios – the place where Elvis recorded his first single “That’s alright Mama” and the rest,as they say, is history. It is a tiny place but you can see below that given my recent live musical “performance” in front of the HR team, I thought I would mime (phew) into a 1959 mic of the kind that the King would have used. And that will be the end of my musical career – you have my word….. 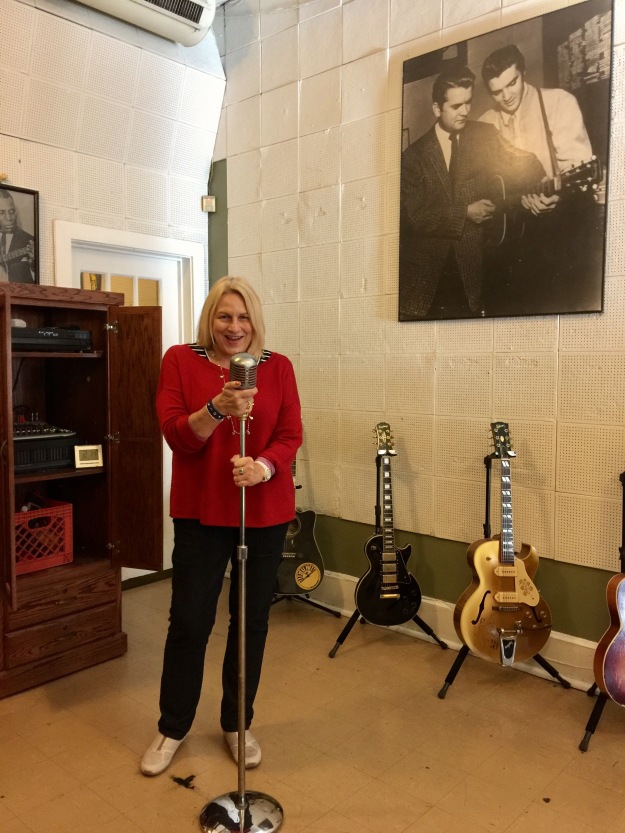 The dry rubbed ribs here are famous so I had to try some at Charlie’s Rendezvous – and reader, I ate them all up. 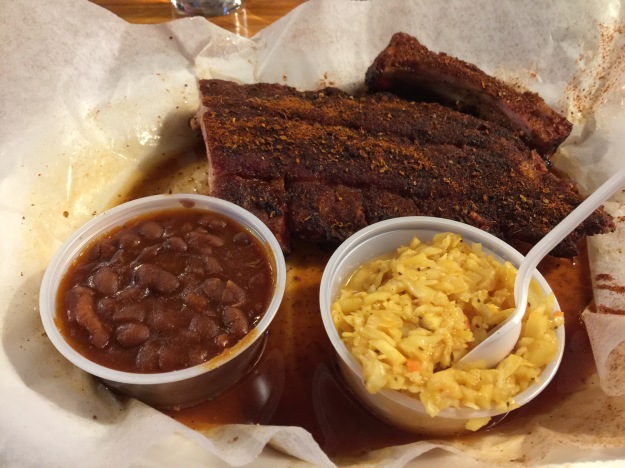